On March 25, 2015, Byhalia Middle School was recognized for two awards at the MS Department of Education's "Champions of Change" Conference.  First, we were recognized as one of 33 schools state wide to receive the status of "High Progress School."  This is awarded "to schools across the state for demonstrating the greatest gains in closing achievement gaps among students.        This award status goes to schools that represent the highest 10% of schools that have improved in overall performance over the past two years and all within the top quartiles of schools in performance gains of the lowest 25% subgroup. 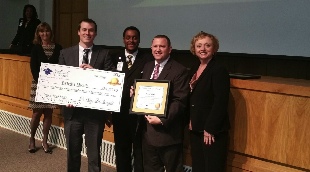 Also in 2015, Byhalia Middle School was recognized as one of 20 schools state wide to receive the status of "Title I Distinguished School."  This is "awarded to the top 20 Title I schools who have effectively closed the achievement gap between the black and white student subgroups in Reading/Language Arts and Mathematics for two or more consecutive years

Welcome to the SchoolBlocks
self-guided tour!

The most common question we receive is, how is SchoolBlocks inspired by Pinterest? SchoolBlocks eliminates navigation bars and uses a block style layout that’s similar to Pinterest. It creates a unique and engaging browsing experience, optimizes for mobile and removes a lot of navigational complexity.

Please click on the red plus signs found on this page to learn more about specific features.